The best nootropics can do more for brainpower than you might think. But finding the right supplement can be challenging.

This guide is written to help you do just that.

We'll discuss how you can figure out which nootropics work. Discussing the science behind nootropics, the forms and combinations that are most effective, and how the best nootropics stack may deliver everything you need for brain power in one formula.

What Makes a Nootropic the Best?

Nootropics are cognitive enhancers. That means to be considered among the best, there must be scientific evidence showing they boost brain function in one (or many) ways, such as:

Addressing specific cognitive health concerns: For example, some may seek out the best nootropic for ADHD specifically, the most effective for Age-Associated Memory Impairment (AAMI), the top nootropic for energy, etc.

In addition to scientific evidence and ability to meet user needs, in order to be the best, a nootropic must be safe to take.

Let's take a closer look at some of the best nootropic substances you'll find in supplements today that meet these criteria.

Mind Lab Pro® is the world's cleanest and most effective brain supplement.

*A word on nootropics and smart drugs

Although the terms nootropics and smart drugs are sometimes used interchangeably, it is important to remember that they are not always the same.

But not everyone wants a prescription drug. In this article, we are focusing on nootropic supplements that are available without a prescription.

All of the following nootropic supplement ingredients are backed by science, with many featuring strong Gold Standard human research studies.

Citicoline may be most well-known as a clean and effective mental energizer. It powers up the brain on a cellular level – within brain cells' powerhouse mitochondria – to enhance alertness and improve mental performance without the "crash" of a stimulant or a smart drug.

Citicoline works in many ways to boost many aspects of brainpower – making it the best nootropic overall. In terms of cognitive benefits, researchers have suggested that Citicoline may help with: Phosphatidylserine (PS) is the best nootropic for memory. It has additional anti-stress effects and cognitive benefits that may help with competitive performance.

Phosphatidylserine (PS) is a phospholipid (healthy fat) nootropic used in brain cell genesis, repair and maintenance. It is especially important for brain cells, including their outer membranes and nerve-protective myelin. PS has additional roles in brain chemicals and brain cell energy metabolism.

PS enhances several cognitive functions, with its greatest nootropic benefits in the area of memory.

Bacopa Monnieri may be the best nootropics for studying, with unique brainpower benefits that boost memory, learning and cognition under stress.

Bacopa Monnieri's versatile brain benefits deliver some of the best cognitive effects for students and learners, but may help anyone seeking a sharp mental performance edge without stimulants or smart drugs.

Researchers have suggested that Bacopa Monnieri may help: In a study that included 81 healthy Australians over the age of 55, Bacopa Monnieri supplementation for 12 weeks appeared to significantly improve verbal learning, memory acquisition, and delayed recall.13 In another study, researchers linked Bacopa Monnieri supplements to significant improvements in delayed recall memory. In weeks 0-12, a 36.5% improvement was noted with Bacopa supplementation.

Over the study's 24-week duration, a 78% improvement in delayed recall was noted with Bacopa.17

Bacopa Monnieri is popular in nootropic stacks because it is associated with so many different performance-oriented brainpower benefits.

According to scientific research, Lion’s Mane Mushroom appears to be to be the best nootropic for Nerve Growth Factor (NGF).18 Healthy NGF levels in turn support several cognition-enhancing brain functions.

Lion's Mane Mushroom is one of the best mushroom nootropics. Its NGF-boosting bioactivity is rare, but highly significant for brain health and mental performance: Antioxidants fight cell aging, including within the brain. Antioxidants work by neutralizing the cell-damaging, age-accelerating effects of toxic free radicals. Maritime Pine Bark Extract is a strong antioxidant substance because it:

Maritime Pine Bark Extract emerges as the best nootropic antioxidant because it does far more than protect the brain.

The flavonoid antioxidants that are found in Maritime Pine Bark also:

Researchers have linked flavonoids’ brain-regenerative and anti-aging bioactivities to improvements in memory, learning and overall mental function, as well as a potential reversal of age-related cognitive decline.23

L-Tyrosine is the best nootropic for achieving peak cognition and clarity in challenging, pressure-filled situations – and then supporting mental recovery afterwards.

L-Tyrosine is an amino acid used to make brain chemicals involved in memory, mood and mental processing, including dopamine and norepinephrine.

Stress, multitasking and other intense cognitive functions deplete these performance-oriented brain chemicals, which may lead to brain fog and attention problems.

Researchers have suggested that L-Theanine's nootropic benefits include:

L-Theanine is also a research-backed sleep enhancer.34 This strengthens L-Theanine's reputation as one of the best overall nootropics, because healthy sleep is key for brain regeneration and sharp daytime cognition. Rhodiola Rosea is a legendary mental and physical performance enhancer for athletes, especially in Russia.

B-Vitamins get a special nootropic mention because they are among the best essential nutrients for the brain, but not everybody gets enough. While the B-Complex as a whole is believed to support brain wellness, three Bs in particular are most important for a brain supplement:

Vitamin B6 is one of the best nootropics to look for in brain supplements because it regulates synthesis and conversion of neurotransmitters involved in healthy cognition, mood and memory performance.

Researchers have suggested that Vitamin B6 may:

Vitamin B9 is a top nootropic supplement because it helps balance homocysteine levels, thereby optimizing blood flow to the brain and production of cognition-critical brain chemicals.

High homocysteine levels correlate to low B9 intake. Both are linked to cognitive decline and unhealthy changes to brain structure.43

B9 also plays a role in the synthesis of the brain chemicals serotonin, norepinephrine and dopamine.45

Vitamin B12 is an important essential nutrient for the nervous system, including the brain. It supports brain cell energy metabolism and the formation of healthy, protective nerve sheaths.46

Low levels of B12 are associated with cognitive decline and mental imbalance. Researchers have suggested that as a nootropic, Vitamin B12 may help to

Vitamins B6, B9 and B12 are the best vitamin nootropics for overall brain wellness.

When stacked together Vitamins B6, B9 and B12 unlock another benefit that makes them three of the best nootropics for long-range brain health: They help to regulate homocysteine levels.

High homocysteine is a strong modifiable risk factor for cognitive decline because it interferes with circulation to the brain.

Vitamins B9, B6 and B12 for Healthy Blood Flow to the Brain

Vitamins B6, B9 and B12 are all involved in homocysteine metabolism, which in turn supports healthy cerebral circulation and brain chemicals: The best nootropic supplements may include Vitamins B6, B9 and B12 to help regulate homocysteine, thereby supporting brain chemical conversion and healthy blood flow to the brain.

In a meta-analysis review of 12 human clinical trials including over 1,100 study subjects, researchers suggested that B-vitamin supplements help with homocysteine metabolism:50

The above list covers some of the most effective single ingredient nootropic supplements on the market today.

But many biohackers are looking for more cognitive benefits than a single ingredient or smart drug can provide. Enter the "Nootropic Stack Supplement" that combines several cognitive enhancers into one formula, in order to improve brain function in many ways.

Mind Lab Pro® is a nootropic stack supplement that selects the best brain boosters from a long list of possibilities – combining 11 research-backed ingredients, each of which has multitasking benefits for multiple aspects of cognitive function and brain health.

As a result, Mind Lab Pro delivers more brain function benefits than other nootropic stacks on the market. It's just one reason it's the best. 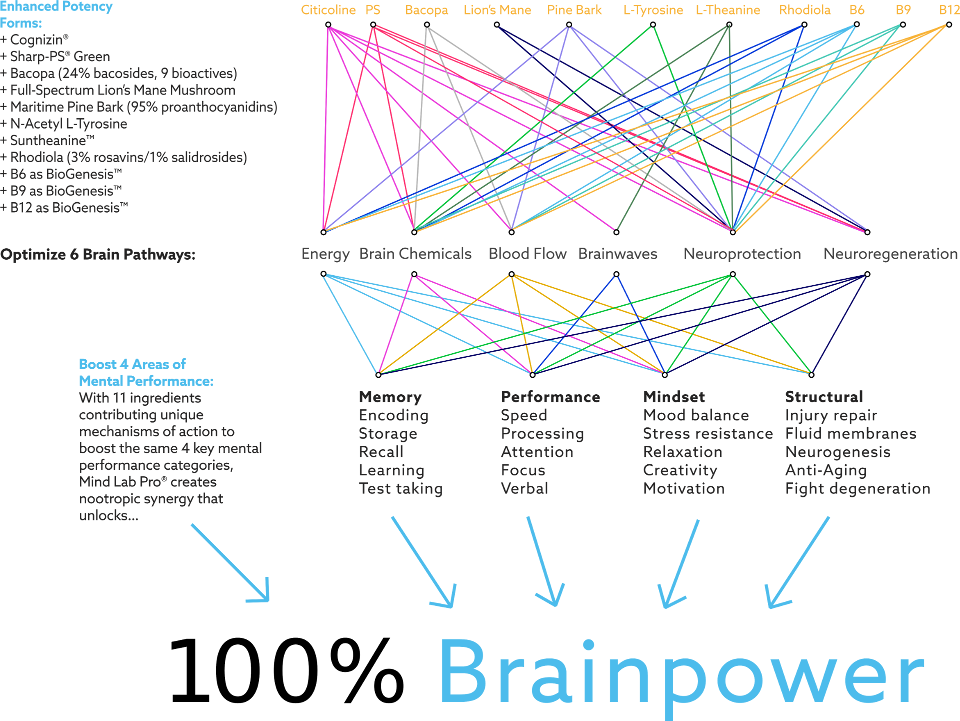 Another reason it is a top shelf stack: Smart formulation. Mind Lab Pro® doesn't just provide a lot of benefits, it provides more powerful benefits by employing a stacks within stacks strategy.

Mind Lab Pro® targets the brain power benefits most people are seeking, and then combines several nootropics to provide stronger results. Some examples:

Together in Mind Lab Pro®, Rhodiola Rosea, Citicoline and Vitamin B12 combine to promote mental energy in separate, complementary ways.

Both Rhodiola and Citicoline have been noted to achieve their brain-energizing effects without the crash or side effects of caffeine or other typical energizers.

Together in Mind Lab Pro, these nootropics supply the raw materials, energy and growth factors that all contribute to healthy brain regeneration.

Together in Mind Lab Pro®, the nootropics PS, Rhodiola and Bacopa combine to support the healthy stress responses and mental clarity that help contribute to peak brain function during athletic competition.

Mind Lab Pro® takes care to not only boost brainpower, but support mental recovery and overall brain health along the way.

Top Nootropics for Thinking Under Pressure

This mini-stack forms a powerful nootropic duo for dynamic, competitive and high-performance individuals.

Together in Mind Lab Pro®, these two nootropics help to support mood via separate complementary brain pathways, without smart drugs or their potential side effects.

Bacopa, PS and Lion's Mane may help learners to encode and recall valuable knowledge in the short term, as well as supporting the ability to draw upon that stored knowledge for years to come.


This mini-stack can help students and learners of all ages to retain and recall new knowledge.

Are nootropics safe? Do they really work? Not always. To be the best, a nootropic supplement must be clean and high quality – for the best results, fewest discouraging side effects, and greatest overall safety profile.

Mind Lab Pro® is the best because it high quality across the board:

Finally, Mind Lab Pro® is the best nootropic stack because it's one of the only ones on the market that has been the subject of a rigorous clinical human trial. In this research, it was shown to improve brain function across several key cognitive markers.

Conclusion - What is the most effective nootropic on sale today?

Whatever your cognitive goals may be, it is the best nootropic supplement you can take. It is one formula that optimizes the whole brain – unlocking a peak performing mind that helps you do everything better, no matter who you are or what your lifestyle may be.

Best of all, Mind Lab Pro® delivers its life-enhancing brainpower benefits in a clean, superior-quality formula. It's not a synthetic smart drug. It is safe, side effect-free, and great for overall brain health – so you can achieve 100% Brainpower™ now while nourishing your brain for a bright, healthy future.